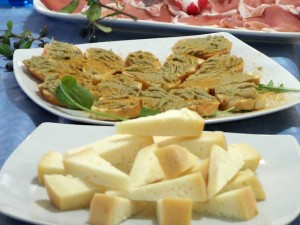 What kind of person/cyclist are you?

Well, in Ogliastra, land of brave men and women, you could sort its mankind in different types, by using an alimentary metaphor: its cheeses.

Let’s see: were you a cyclist coming back very tired from your long trip, you’ll be just able to fall weakly on a sofa, ammattulàu.

As a consequence, you would just be useful to make the pàrdulas (of cheese, not ricotta): you could be the casu de màttula (the one used to make pàrdulas. Don’t feel offended, you are still superior to ricotta, which here is not even deemed to prepare sweets!).

In case you were already trained for the uphills of this land, you could then be considered to all intents and purposes the ultra-seasoned pecorino-cheese, use to make the mass’ e is culurgiònis (the inner body of Sardinian ravioli, consisting in the 50% of the total ravioli, more or less).

In the unluckily case (but, anyway, possible) you’ve come back home with a hole in a wheel, they don’t need to be a genius to guess that you would be good just for doing the casu axèdu (acid cheese) accompanying the Sardinian flat bread pistoccu, which moderates its strong acidity.

And, what about that day in which you will have become so self-confident to challenge your fellows during the bike-journey? You will definitely be casu ‘e fitta/cheese to slice. It is put in soups… Do we have to say anything else?…

Yes, maybe to translate the unclear word in italics?…

ammattulàu: adjective used to indicate someone half-hearted or something dull. If you look or taste that cheese (casu means cheese) of màttula, you’ll immediately understand.

pàrdulas: little cheese-cakes made of casu de màttula (see above), saffron, sugar, surrounded by a thin pastry. In other areas of Sardinia they use ricotta-cheese instead of casu ‘e màttula.

massa de is culurgiònis: the inner part of Sardinian ravioli (culurgiònis) that is to say: pecorino-cheese, potatoes, minced garlic, extra-virgin olive oil, salt and, up to the chef, mint.

casu de fitta: highly salty, hard and very tasty cheese. You can grate it (don’t try to eat a slice of it: you could regret your choice!) in order to make a soup (or something else) a little more tasty.

One thought on “Ogliastra and its cheeses”