Looking at it today the system of roads that crossed the Roman Empire in its greatest splendor, one is impressed by the capillarity and organization of the network.
From Wales to Mesopotamia, from Crimea to the Atlas Mountains in Africa, this is what greatness looks like. An efficient road system that connected provinces, cities, ports, borders and military outposts, which many experts have indicated among the secrets of Rome’s power and longevity.
The map below perfectly highlights the wonderful functionality of a network created 2000 years ago! It’s an interesting and fun work done by a young American cartography expert (Sasha Trubetskoy), inspired by the London Underground model. 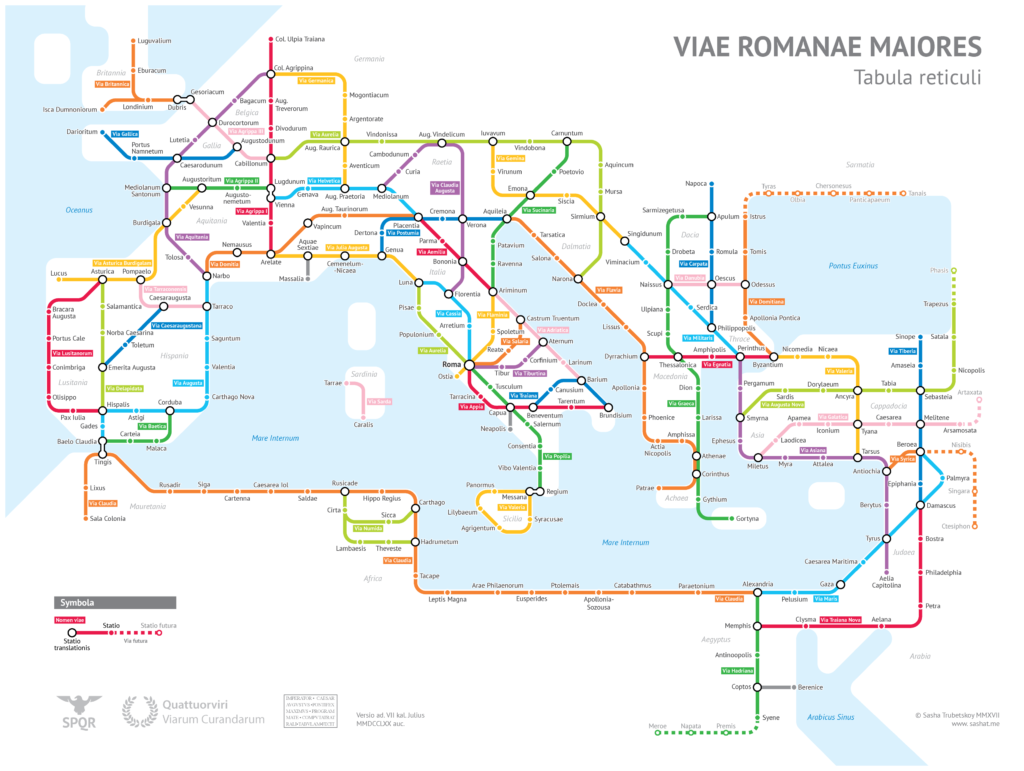 If we move on to analyze the design and management techniques, we will remain even more admired of the perfection of this infrastructure:
Roads were planned straight as possible (look at via Aemilia), even removing natural obstacles, building long bridges and digging the mountains when needed.
A sharp system of milestones allowed travelers to orient themselves and calculate distances precisely. In this regard it is curious to note that the emperor Augustus chose to place a marble stone, covered with bronze (Miliarium aureum), in the center of Rome, to symbolize that all roads originated from that point.
A scrupulous construction technique, using layers of different materials, made it possible for many roads to reach us still intact. It begins with the excavation of about half a meter, which can be consolidated with poles driven into the ground if necessary. Then the first layer of clay or pressed sand is spread, followed by a second layer of stones of various sizes, called statumen. Then a layer of coarse gravel or crushed shards called rudus. A layer of finer gravel joined to cement, called nucleus, precedes the laying of blocks or slabs of basalt or limestone, called summum dorsum. A slight inclination of the road surface towards the sides allowed the water to flow down the drainage channels. Often on the side of the road, gravel paths stretched for the passage of pedestrians, but in the most beaten sections real sidewalks covered with stone slabs were created.

Military, but also diplomats and politicians, those in charge of the mail service, merchants and ordinary people traveled on this intricate network. But while the military was self-sufficient, all other travelers needed board and lodging services. So in the Augustan era, the network was provided with travel support services. First of all, there were the mansiones, which were places with a restaurant, hotel, and stable. The mansiones were arranged one day off each other. In between there were about 6 mutationes, which served as stations for changing and refreshing the horses. The accommodation in the mansiones was reserved for gentlemen only, the service staff who accompanied them stayed in the adjacent cauponae.
Other buildings stood near the parking stations, including the tabernae and stabulum. The tabernae, similar to our current restaurants with adjoining rooms for common travelers, generally stood near the mansiones. While stabulum were similar to our dives and were often disreputable places.

You would be surprised to know how many of the roads we still travel today come from the great work of Roman engineers. Soon we will suggest some of these that deserve a trip to discover them, perhaps with us 😉