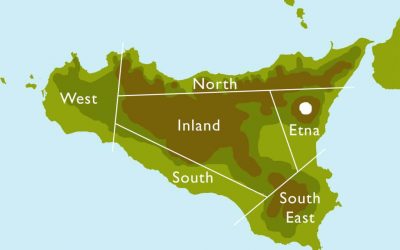 Sicily is a vast region with plenty of different landscapes, so it’s quite difficult to pick the best cycling area. For sure a bike tour in the south east it’s very diverse from a tour inland…unless you want to do our Sicily Bike Expedition, covering almost the whole region 🙂
We are in love with this island, yet we need to say that you may see litter along the roads, especially close to main cities. This is disturbing, but extensively compensated by its food, wines, immense culture and lovely people.

It’s the most Arabic part of Sicily, you’ll find this in the food, architecture and even the people. There’s a good hotel selection near the main towns, and some nice Agriturismo (farmland called “Bagli”) inland.
There are fantastic beaches like San Vito lo Capo and stunning view points like Erice, the countryside is cultivated and there are some marvelous vineyards. This is for sure a great cycling area.
Terrain
flat/rolling along the coast, rolling inland.

Palermo is a flamboyant city, and you deserve visiting it. Avoid the cycling along first stretch from Palermo to Cefalu, there’s traffic and it’s not so appealing.
Starting from Cefalu the coastline gives some great views over the ocean, with the Eolian Islands in the distance during clear days. Messina greets you with Ganzirri lagoon and the views over the “Stretto”, the strait separating Sicily from Italy main land.
Terrain
Gently rolling with few climbs to the top of some villages along the coast, and serious climbs going inland to Nebrodi and Madonie mountains.

Probably this is the best cycling area of the whole region, thanks to the heritage of Baroque, a neat countryside and a vast offer of charming hotels. Not to mention the food…but this apply to all Sicily. All towns of the area always have an incredible historical center, one of the ones we like the most is Ragusa, with its views of ancient Ragusa Ibla.
The peaceful countryside is garnished with endlessly limestone walls, and the coast hosts towns like the charming Siracusa and sandy beaches like the ones south of Modica.
Terrain
Hilly, with some proper climbs to reach the hilltop villages and to get on top of Monti Iblei plateau.

This is the less touristic part of Sicily, so do not expect to find charming accommodations everywhere. Yet you’ll be rewarded with the serenity of this part of the region.
Vast grain fields and flocks of sheep, deserted roads and “vintage” villages, riding here makes you feeling you are really off the beaten path.
Terrain
You’ll find big hills, so the climbs are not steep but can be long.

We totally love this majestic Volcano, with its extremely neat villages built with basaltic black stone. The views, either towards the mountain or to the coastline, are unbelievable on clear days, and the countryside is very well kept with little litter compared to other areas of the region.
Terrain
Well, Etna is a 3300 meters mountain (about 10k feet), and of course if you want it’s plenty of climbing. Fortunately it’s possible to ride on its slopes, along the roads connecting charming villages like Zafferana, Pedara, Linguaglossa and so on. On the other side there’s Bronte, famous for its typical Pistachio.

The cycling from Sciacca to Agrigento is lovely, our tours follow some small roads along the coast, exploring the inland when it gets more interesting.The Valle dei Templi just outside of Agrigento, is one of the highlights of whole Sicily. There are some beautiful spots along the coast, like Siculiana and the famous Scala dei Turchi rock formation. The less interesting part goes from Agrigento to Gela, because of oil refineries and industrial areas.
Terrain
Mostly flat, with some gentle rolling roads.